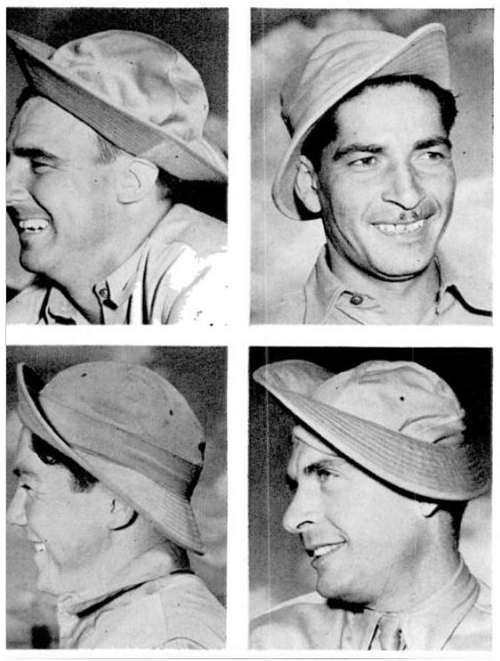 “How is the new Army fatigue hat supposed to be worn? The men of the 45th Division, Camp Barkeley, Texas, would like to know. In lieu of an official edict, here are four suggested solutions, all doubtless incorrect. Pvt. Bert Stephenson (top left) wears his sailor style; Pvt. Juan Varels (top right) prefers a snap-brim effect; Pvt. Jaramillo Regimio (lower left) imitates firemen and fishermen while Pvt. Hack Lawrence (lower right) simply does a Lily Daché and lets it go at that.”

Dubbed the “Daisy Mae,” this hat went into service in 1941 replacing a hat of similar design that was previously made of denim. The Daisy Mae however was made of an olive drab herringbone twill, the new standard for field uniforms. Notable: the fella in the third picture was able to bust through both knees of his dungarees. Other images sourced from here.

If you’re looking for something a little different check out Tantum‘s wares, otherwise reproductions are available from: At The Front, MASH (denim), and WWII Impressions (herringbone & denim)